I decided after a few issues with the blogging CMS Dropplets that it was time for a change. I decided to move onto a different blogging system, Jekyll.

Jekyll is supposed to be a

A simple, blog-aware, static site is exactly what I had before with Dropplets, but checking out their GitHub Repo I was very impressed. There had been commits today! I was very excited about a project that was current and a little bit more widely used.

I first had to install Jekyll which they say on their Quick Start to follow these commands:

But that is assuming that you have the prerequisites installed:

Installing RVM: Ruby Version Manager is highly recommended. You can install RVM and the latest stable version of Ruby by typing in:

Also it is recommended to place this in your ~/.profile file:

RubyGems should be installed but just to make sure everything is up to date run this command:

If not, check out the RubyGems Site.

I went ahead and installed NodeJS onto my laptop. I downloaded the easy installer and was able to install it with no pain.

Now I was back in business! I ran the commands: 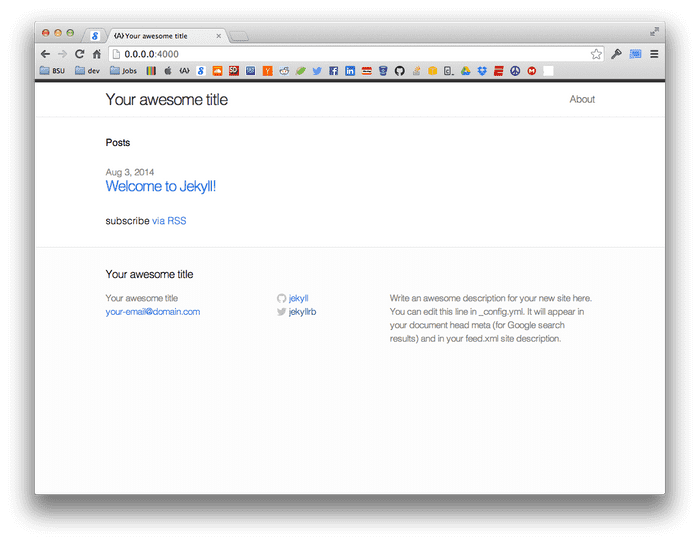 Now I was on the look out for a simple, flat and easy blog looking theme. With some quick Googling I found a theme that I liked called Lanyon. Lanyon has a great design and user experience for a simple blog. Also, I loved the reference from the book Dr. Jekyll and Mr. Hyde.

I fell in love with the theme and was very excited that one of my favorite developers Mark Otto developed the theme. Mark also was one of the main developers for the beautiful Bootstrap Framework that I use on my main homepage.

I started hacking on the cloned repository and loved the code style, the documentation, and the ease to get things done quickly. I had to manually change some of the files from the old Dropplets format, to the the new Jekyll format. They still shared the Markdown file format, just had different naming conventions and file structure.

Building and deploying to a local environment went extremely quick with the command:

Which was ran from the inside of the of the Lanyon directory. The --watch flag which is "Same as jekyll serve, but watch for changes and regenerate automatically". So I would just have to do a quick refresh on http://0.0.0.0:4000/ and all my changes would appear in my browser.

After I was done developing the blog, I had to figure out how to deploy the static code that was generated by Jekyll, reading the deployment documentation that it could not be easier.

Copy the generated _site folder to the root folder of your hosting account.

Super easy! And even easier with the Sublime SFTP Plugin. All I have to do is right click on my _site folder and sync it up with my web server after a quick jekyll build and my blog is updated.

I could not be happier with the theme Lanyon and Jekyll project. Look for more blog posts of my experience with Jekyll and continue to check back to see my tweaks of the new look.